In the early 1990's, a customer asked Hander Woodworking to built a bed that sat somewhat higher than an average bed for ease of climbing in and out of.  Unfortunately, what became easier for the customer became impossible for his Scotties.  Rather than constantly lifting them up and down, he commissioned Hander Woodworking to design and build a portable, folding stair case.  As can be seen in the pictures, the stairs fold onto themselves for storage and movement as the leading end of the bottom moldings are upturned to act as skids on which to slide the stairs, preventing snagging of carpet fibers.  The case is roughly 30 inches tall by five feet long but weighs less than 30 pounds with perhaps eight of those pounds encompassed in the two, steel, scissor hinges that were custom made for that purpose.  Like most projects, the finished product looks surprisingly simple, belying the actual amount of work in the designing and building of the piece as the design drawings, below, will attest to. 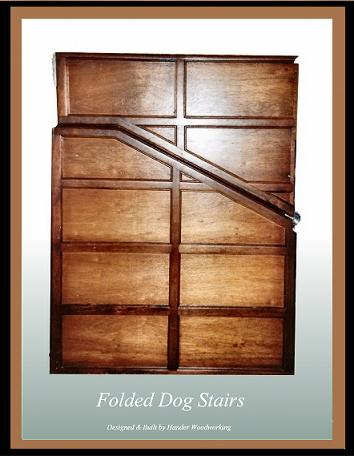